Punishing the Poor: Criminalizing Poverty | Beyond the Page
Skip to main content 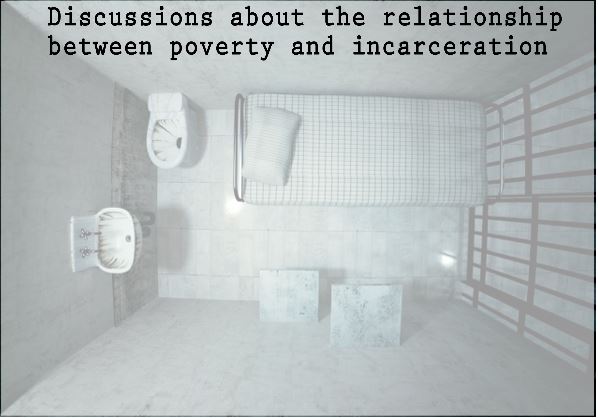 Is there a predatory system of law enforcement in place that traps low-income people in never ending cycles of fines, debt and jail time? Why are poor people targeted and held in captivity for stringent enforcement of minor offenses in this wealthy nation?

This project focuses on the philosophical exploration of applied ethics in regard to the issues of mass incarceration in the United States since the 1980s, the modern day version of debtors’ prisons, the validity and effectiveness of policing and court procedures in low-income neighborhoods, and a comparison of incarceration systems worldwide.

Punishing the Poor: Criminalizing Poverty will feature a series of presentations by knowledgeable speakers:

Understanding Race and Criminal Justice in Wisconsin will provide graphical displays of trends in imprisonment and arrest in Wisconsin including comparisons between Wisconsin and the rest of the country and comparisons of different areas in Wisconsin. Pamela Oliver will discuss the various explanations for these patterns in the racial-political history of Wisconsin and the nation and will invite the audience to ask questions and contribute their ideas. Discussion topics will include specific policies that have had effects as well as the effects of conscious or unconscious racial bias and the indirect racial consequences of seemingly race-neutral policies and practices.

Paying the (System’s) Bills describes how as government agencies around the country faced dramatic budget cuts in the wake of the fiscal crisis, many turned to new sources of revenue to make up for budgetary shortfalls. One of the primary sources has been people processed by the criminal justice system. Many convicted people find themselves facing not only jail or prison sentences, or terms of community supervision, but also an ever-increasing host of fees from co-payments for representation and court-required treatment programs, to flat fee supervision fees and court assessments. The cumulative effect of these legal financial obligations often creates unintended consequences, some of which deserve greater attention by the public and policymakers. This presentation uses field work from several counties throughout the United States as a lens for exploring the effects of requiring those punished by the criminal justice system to also pay an increasing share of its operating costs. Cecelia Klingele, UW-Madison law professor, will present.